Samuel Johnson On the Absurdity of Materialism

The pen of 18th century London journalist Samuel Johnson produced many memorable quotes, but this one is by far my favorite. If only the legions of 21st century materialists would take it to heart… 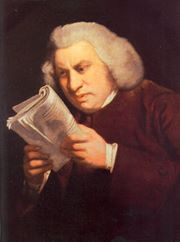 A learned gentleman who holds a considerable office in the law, expatiated on the happiness of a savage life; and mentioned an instance of an officer who had actually lived for some time in the wilds of America, of whom, when in that state, he quoted this reflection with an air of admiration, as if it had been deeply philosophical: ‘Here am I, free and unrestrained, amidst the rude magnificence of Nature, with this Indian woman by my side, and this gun with which I can procure food when I want it: what more can be desired for human happiness?’

It did not require much sagacity to foresee that such a sentiment would not be permitted to pass without due animadversion. JOHNSON. ‘Do not allow yourself, Sir, to be imposed upon by such gross absurdity. It is sad stuff; it is brutish. If a bull could speak, he might as well exclaim, Here am I with this cow and this grass; what being can enjoy greater felicity?’

From The Life of Samuel Johnson

I was converted out of paganism and the occult in 1993 and while I was initially Charismatic/Arminian in my theology, I became Reformed and Presbyterian through bible study and the influence of ministries like RC Sproul's. After teaching in local bible studies, and taking seminary courses part time, I began to feel called to the ministry in 1997. I was Ordained as an RE at Christ Covenant PCA in Hatboro, PA in 2000 and as a TE by Central Carolina Presbytery in 2001 when I was called to be the Organizing Pastor/Church Planter for Providence PCA Mission, Cross Creek PCA's church plant in Fayetteville, NC (home to Ft. Bragg and Pope Airforce Base). In 2005 when the Providence PCA Particularized I was blessed to be called by the congregation to be their Pastor
View all posts by Andrew Webb →
This entry was posted in Apologetics, Philosophy and tagged Materialism, Philosophy, Quotes, Samuel Johnson. Bookmark the permalink.

2 Responses to Samuel Johnson On the Absurdity of Materialism