And You Thought YOUR Pastor Preached Long Sermons!

Very few congregations today can endure a sermon for longer than one hour, and it’s common to hear complaints when a sermon exceeds 45 minutes in length. But it’s worth noting that in the past Reformed Christians regularly endured and even thrived under preaching that lasted for two hours or even longer. For instance, the following is recorded of John Craig, one of the first Presbyterian ministers in Western Virginia: 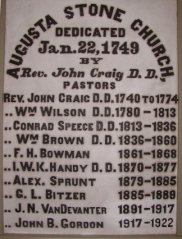 hn Craig walked five miles to the place of worship. In one hand he carried a Bible. In the other hand or upon his shoulder he usually carried a rifle, to be used against Indians if they should make an attack. All the men of his congregation likewise brought rifles. A powder horn was hung from each man’s shoulder by a long strap. At ten o’clock in the morning the people were seated in their accustomed places upon rude benches made of logs and the service began. The minister continued to preach his sermon until noonday. Then for an hour the men, women and children of the congregation sat down in family groups beneath the shade of the great trees and ate their simple midday meal. At one o’clock, the minister resumed the same sermon and continued until after sunset. It was sometimes so late when the sermon was brought to a close that the leader of the congregational singing could scarcely see how to read the last psalm. One of John Craig’s sermons has been handed down in the written form. We may understand how it occupied the attention of the congregation for an entire day, when we learn that it is arranged under fifty-five heads, or divisions.” [Henry Alexander White, Southern Presbyterian Leaders, B.O.T., 2000, pp. 33-34]

One might be tempted to think that Craig was only invited to preach one of these seven hour mega-sermons, but he continued this manner of ministry for many years and it is said of Craig that, “…his heart was always full of tenderness. Multitudes were brought into the kingdom of God through his labors.”

While I wouldn’t personally recommend preaching for over 50 minutes, it should be remembered that at times, long sermons have been greatly used by God. For instance, Acts 20:7-12 tells us that during the Sunday worship of the church at Troas, the Apostle Paul preached until midnight,  paused briefly to raise a young man named Eutychus from the dead who had fallen asleep and out of a third story window, ate a meal and then continued on speaking till daybreak. The total length of Paul’s message was probably around twelve hours in length.

It’s worth keeping these examples in mind the next time you are tempted to call a sermon “too long!”

I was converted out of paganism and the occult in 1993 and while I was initially Charismatic/Arminian in my theology, I became Reformed and Presbyterian through bible study and the influence of ministries like RC Sproul's. After teaching in local bible studies, and taking seminary courses part time, I began to feel called to the ministry in 1997. I was Ordained as an RE at Christ Covenant PCA in Hatboro, PA in 2000 and as a TE by Central Carolina Presbytery in 2001 when I was called to be the Organizing Pastor/Church Planter for Providence PCA Mission, Cross Creek PCA's church plant in Fayetteville, NC (home to Ft. Bragg and Pope Airforce Base). In 2005 when the Providence PCA Particularized I was blessed to be called by the congregation to be their Pastor
View all posts by Andrew Webb →
This entry was posted in Old School Presbyterian Churches, Preaching and tagged Augusta Stone Church, John Craig, Long Sermons, Old School Presbyterianism, preaching, The Apostle Paul, Troas, Western Virginia. Bookmark the permalink.