Recommended Reading “What is Biblical Preaching?” by Eric Alexander 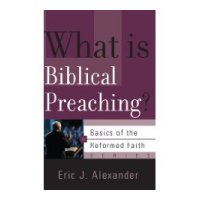 Pastors are sometimes more reticent than reporters when it comes to revealing their sources. But I’ll go ahead and and let you know that I first encountered EM Bound’s advice regarding the link between the pastor’s piety and the power of his preaching through Iain Hamilton, who in turn discovered it via Eric Alexander. But that particular emphasis certainly isn’t original to to modern preachers like Alexander or even 19th century writers like Bounds, you’ll find it in the writings of experimental Calvinists through the ages, including Princetonians like Archibald Alexander, Puritans like Watson, Baxter, and Owen, and even Reformers of the 16th century (there is a great vein of this in the writings of Tyndale and even Calvin, for instance)

In any event, given the modern day cynicism regarding the notion that there might be a link between prayer, piety, and the efficacy of preaching, I want to strongly recommend a wonderful little booklet recently published by P&R as part of their Basics of the Reformed Faith series entitled “What is Biblical Preaching?” The booklet is by the aforementioned Eric Alexander, and while the series itself is intended to introduce laymen to Reformed doctrine, this particular pamphlet is more applicable to the needs of pastors. Indeed, it is actually based on a series of lectures originally delivered to pastors on the subject of preaching. entitled

Anyway, in keeping with the theme of the earlier post, here’s a section from the booklet, in which Alexander discusses the vital spiritual dimension in preaching. I hope this will help to sharpen and clarify the previous post:

BIBLICAL PREACHING IS SPIRITUAL IN ITS ESSENCE

This is one of the most vital truths about biblical preaching. Let me explain what I mean: the task of true preaching is not essentially intellectual or psychological or rhetorical; it is essentially spiritual.

Left to ourselves, we may do many things with a congregation. We may move them emotionally. We may attract them to ourselves personally, producing great loyalty. We may persuade them intellectually. We may educate them in a broad spectrum of Christian truth. But the one thing we can never do, left to ourselves, is to regenerate them spiritually and change them into the image of Jesus Christ, to bear his moral glory in their character. While that is the great calling of the church of Christ, it is essentially God’s work and not ours.

So it is possible to be homiletically brilliant, verbally fluent, theologically profound, biblically accurate and orthodox, and spiritually useless. That frightens me. I hope it frightens you, too. I think it is of this that Paul is speaking when he says, “I planted the seed, Apollos watered it, but God made it grow. So neither he who plants nor he who waters is anything, but only God, who makes things grow” (I Cor. 3:6-7). It is very possible for us to be deeply concerned about homiletical ability and fluency and theological profundity and biblical orthodoxy, but to know nothing of the life – giving power of God with the burning anointing of the Holy Spirit upon our ministry. Campbell Morgan (Lloyd-Jones’s predecessor at the Westminster Chapel) divulged that at one crucial stage in his ministry he was in precisely this position, and sensed that God was sayingto him, “Preach on, great preacher, without me.” Alan Redpath used to say that the most penetrating question you could ask about any church situation was, “What is happening in this place that cannot be explained in merely human terms?”

So there is a world of difference between true biblical preaching and an academic lecture or a rhetorical performance. We are utterly dependent on the grace and power of the Holy Spirit. Thank God, he uses the weak things of this world to confound the mighty, and the things that are not to bring to nothing the things that are (1 Cor. 1 :2,8). This is why it is absolutely essential to marry prayer to the ministry of the Word. In our ministries prayer is not supplemental; it is fundamental. Of course we subscribe to the principal that “this work is God’s work, not ours.” We subscribe to that because we are biblical Evangelicals, but the logical corollary of that statement is that prayer is a fundamental issue in the ministry of the Word, as in every part of our labor, and not, as we tend to make it, a supplemental matter.

That, of course, does not mean that we should not be interested in methodology. Nor does it mean that we have to be stupid enough to ignore new ideas and new insights, or to be careless in our administration and exploration of methods that are valuable and effective. But we do need to ask God to write on our hearts that this task he has given us is spiritual in essence.

I was converted out of paganism and the occult in 1993 and while I was initially Charismatic/Arminian in my theology, I became Reformed and Presbyterian through bible study and the influence of ministries like RC Sproul's. After teaching in local bible studies, and taking seminary courses part time, I began to feel called to the ministry in 1997. I was Ordained as an RE at Christ Covenant PCA in Hatboro, PA in 2000 and as a TE by Central Carolina Presbytery in 2001 when I was called to be the Organizing Pastor/Church Planter for Providence PCA Mission, Cross Creek PCA's church plant in Fayetteville, NC (home to Ft. Bragg and Pope Airforce Base). In 2005 when the Providence PCA Particularized I was blessed to be called by the congregation to be their Pastor
View all posts by Andrew Webb →
This entry was posted in Old School Presbyterian Churches, Pastoral Theology, Prayer, Preaching, The Means of Grace. Bookmark the permalink.

7 Responses to Recommended Reading “What is Biblical Preaching?” by Eric Alexander